Looking for opportunities among future challenges

Despite deeming it a slightly outdated term, Deloitte Access Economics Partner Matt Judkins said social license to operate would be one of the biggest considerations for the oil and gas sector in the future.

Mr Judkins said over the last few years the LNG sector in particular had been a significant contributor to the economic activity of Australia on the back of large capital expansion projects.

While we are in the operational phase of these projects now, Mr Judkins said we would still see some capital projects starting up, just not at the speed or scale seen previously.

“We are now seeing conversations about what those new projects will look like and I would expect them to be more greenfield in nature and looking at an efficient use of shared infrastructure,” he said.

“We have got ourselves into a good position as one of the largest exporters of natural gas. I see us continuing to hold that mantel as long as we’re smart about what we do and check some of those growth opportunities.”

Despite the positive outlook for the industry in general, Mr Judkins was keen to point out there were some significant challenges ahead for the oil and gas industry and he was looking forward to discussing these in detail during the AOG conference.

Among the impacts he will touch on will be the rise of technology, digital disruption implications and the environmental concerns arising from the policy decisions of various fuel-importing countries globally and the social demands of people in developed and developing nations.

“There will be challenges, as there are in every industry, but what the oil and gas sector needs to do is look for the opportunities within those challenges,” Mr Judkins said.

It is in looking for these opportunities that Mr Judkins said a focus on social license to operate would have the biggest impact.

“Companies need to understand the role they are going to play,” he said.

“We have seen it happen with banks and other groups, especially ones that have a lot of scrutiny around their industry, but the industries that continue to mature are the ones that have a key role to play in creating a prosperous and sustainable economy.

“It a theme that will increasingly become more considered as they make decisions around what role they are going to play in the future.”

Mr Judkins authored a report released in November 2018 called The Shaping Future Cities: A new WAy. One of the key takeaways from this report was the need for collaboration, which he said was important for a prosperous oil and gas sector in Western Australia.

To hear more of Mr Judkins thoughts and his macro-level predictions for the transition of fuel and impact of LNG in the future, head to his Collaboration Forum talk on Thursday 14 March. 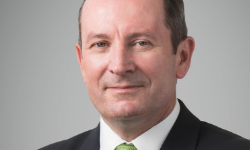