As Australia’s trading partners pursue emissions-reduction targets, our oil and gas stakeholders are diversifying – and so is the sector’s flagship exhibition.

It’s been exactly 40 years since the domestic oil and gas industry’s key players first came together for a networking day entitled Petroleum Technology Australia. That small gathering inspired a recurring event that was soon re-titled the ‘Australasian Oil & Gas Exhibition & Conference’, or AOG. As Australia’s oil and gas sector grew, so did the exhibition, and by the 2010s it was attracting more than 15,000 attendees each year.

Now, as our industry undergoes what is arguably the most significant metamorphosis in its history, AOG is once again re-branding, this time as AOG Energy. The new name reflects the organisers’ ongoing commitment to the businesses that have supported the exhibition over the years, many of whom are currently diversifying their operations.

“AOG has always been curated in partnership with industry and our major supporters to reflect the ever-changing nature of oil and gas,” says event director Bill Hare. “We are pleased to be able to continue collaborating with the industry so closely as our offering and the event evolves.”

The exhibition will, of course, continue to connect the entire oil and gas supply chain – but its scope will widen to encompass emerging forms of energy generation.

Says Hare: “AOG Energy will remain a platform for innovation in all aspects, now with a renewed focus on the energy transition, including hydrogen, renewables and emissions-reduction technology, and the importance of local capabilities in driving the industry forward.”

At this year’s exhibition, a new Energy Transition Zone will group together suppliers and other exhibitors who are working in these nascent fields. Meanwhile, the conference component of the event – which remains free to attend – will explore the energy transition in depth, with sessions devoted to the emerging hydrogen industry.

“Given the recent high-profile announcements by individuals and political parties in support of hydrogen development here in WA, there’s never been a better time for us collectively to be having these conversations,” says Hare.

He points to Andrew Forrest’s impassioned Boyer Lecture in February, during which the Fortescue Metals Group chairman called for the development of a major steel-making industry in WA, fuelled in part by green hydrogen. Forrest believes Australia must act now if it wishes to become a global player in green metals and green energy.

“How the politics will play out is unclear,” says Hare. “But one way or another, hydrogen is happening. The knowledge and expertise that our attendees and exhibitors already possess will be critical to this emerging industry.”

AOG Energy and the future

AOG Energy’s broadened scope not only reflects the latest in Australian policy-making but also brings the event into line with commercial thinking overseas. In a recent international survey of oil and gas companies by Deloitte, more than 90 per cent of respondents said their company already had, or was developing, a long-term strategy for a low-carbon future; and 50 per cent said their company was acquiring businesses outside its core focus.

“The transition toward a lower-carbon future remains on track, particularly for the larger integrated oil and gas companies,” Deloitte said in its accompanying report. “This is due in part to the need to retain their competitive position [in] a growing market in which newcomers are competing to provide cleaner energy to consumers and businesses alike.”

The global energy transition has big implications for the local suppliers that are expected to make up a large proportion of attendees at this year’s AOG Energy event. Hare says he hopes the new and improved exhibition and conference will arm many of these suppliers with the knowledge and tools they need for continued success.

“Supporting suppliers is at the heart of what we do, and we know that many of them will need to adapt in order to serve their customers in the years ahead,” says Hare. “That’s why we’re adapting, too. We will make this transition together.” 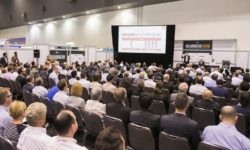