Australia’s largest resource industry event has defied the “gloom and doom” surrounding the global oil and gas sector to post what industry insiders have described as the most successful show in its 34 year history.

Organisers have been thrilled with the flood of attendees who have visited the Perth Convention Exhibition Centre (PCEC) to meet with a record 620 exhibiting companies from 25 countries at the Australasian Oil & Gas Exhibition and Conference (AOG) for the past three days.

“This has been a tremendous week,” AOG Event Director at Diversified Communications, Bill Hare, said.

“Despite all the forecasts that the mood would be down at AOG this year because of the crash in crude prices, the feeling around the Convention centre has been very upbeat.

“We have had a very constant stream of visitors on the Exhibition floor, while the conference, special industry lunches and networking events have been really well attended. The positive feedback we have received across the board has been very pleasing.

“And there certainly wasn’t a feeling of doom and gloom amongst those that were kicking up their heels at our AOG dinner last night.

“But the real proof of the success of this year’s event has been the very strong interest from companies wanting to come back again next year,” Mr Hare said.

The AOG Event Director noted that there were many highlights during the week that have helped make AOG 2015 the most successful in its long history.

“Alongside the record number of companies and the new level of international participation, we have received tremendous feedback on the content of the conference, in particular the new FLNG stream.

“We have also seen our special Timor-Leste industry luncheon create newspaper headlines around Australia, a panel discussion on women in oil and gas we have helped a lot of people to become better informed about critical issues such as FIFO mental health,” Mr Hare said.

One of the leading events on the annual global oil and gas event calendar, AOG will be returning to Perth from February 24-26, in 2016.

“We are already looking forward to it and I am glad to say that many of the people who have been at AOG this week are feeling the same way,” Mr Hare said. 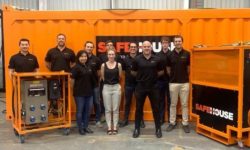