Hand in hand: how AOG Energy has supported operators and suppliers for 40 years

With AOG Energy celebrating four decades of success in 2021, long-time participants reflect on how the event has helped them – and continues to boost the oil and gas industry.

Intrepid pioneers, international players, periods of rapid growth followed by sudden challenges… The recent history of Australia’s oil and gas sector has the makings of an epic novel or a big-screen movie.

The past 40 years in the industry has been action-packed and unpredictable, and a variety of companies and initiatives have risen and fallen. But one recurring event has endured: AOG Energy, formerly known as the Australasian Oil & Gas (AOG) Conference & Exhibition.

“Would the sector have grown without the conference? Of course,” says AOG Energy Event Director Bill Hare. “But we like to think that we helped maximise that growth. We provided a destination for international stakeholders who were already looking at Western Australia: an event that gave them everything they needed in one place.”

As Hare notes, the big overseas operators haven’t been the only ones to benefit from the conference. “I’m proud that our event really champions the domestic supply chain,” he says.

Hare points out that in the years prior to the conference’s foundation in 1981, many international operators drilling in Australia contracted overseas companies to provide supply-chain services. “Our event helped build domestic supply-chain capability and then encouraged foreign investors to take stakes in those new companies,” he says.

One supply-chain company that says it has benefited greatly from AOG Energy is marine vessel operator Bhagwan Marine, which has grown exponentially over the past two decades and now employs more than 650 staff.

“With one exception, we’ve been at the conference every year since our inception in 2000,” says Kerren Kannikoski, the company’s General Manager of Corporate Services. “We find it an incredible networking event. Everyone congregates at AOG. A lot of deals have been done over the years.”

Bhagwan puts so much effort into exhibiting at the conference that it has been awarded Best Stand by organisers three times in recent years. Kannikoski says the weeks she and her staff spend preparing for AOG Energy pays dividends. “I think it’s important to put our best foot forward,” she says, “because AOG is the marketing opportunity of the year.”

Developing relationships in the oil and gas sector can be a years-long process, but the buzz in the air at AOG Energy and the convenience of having so many stakeholders in one place means business is often conducted on the spot.

“One year, we had a Pacson 6” Gate Valve subsea on show and it just happened to be the specific valve that an engineering company needed urgently for a subsea manifold,” recalls Peter Winter, Business Development Manager at Prochem Pipeline Products. “The company was able to actually view the valve at the show and instantly acquire the set of gate valves they urgently required.”

Winter has attended every conference since 1981 and believes the event has been integral in helping Prochem expand.

“AOG has played a major role in our growth,” he says. “It’s given us a platform to display the latest from the manufacturers we represent, and it’s an unparalleled opportunity to catch up with many of our customers.”

“It was very impactful hearing the story from someone in the industry who was openly transgender and how their career evolved and was impacted by their choice to be their true self,” he recalls.

The conference’s lectures and panel discussions have won a devoted following, too. “In our view, AOG’s biggest accomplishment is establishing itself as a solid, consistent forum for the exchange of information, and ultimately, for collaboration of various actors in the offshore industry in Australia,” says Yuriy Drobyshevski, representative of the Western Australia section of The Royal Institution of Naval Architects (RINA).

“My best memory was to see the overflowing room of attendees at the three conference sessions which RINA hosted in Knowledge Forum at AOG 2017. Promoting such exchange of technical knowledge is one of the key objectives of our society, and it was very satisfying to see this happening at AOG.”

Motivations for attending AOG Energy may vary, but long-time participants seem to agree that the show’s regularity is a major plus – for them individually and the industry.

“As our products include smartphones and tablets specifically built for potentially explosive situations, they are constantly changing and evolving alongside consumer innovations,” notes Rob Stone, Managing Director of Transtek. “Having an event like AOG allows us to showcase the latest technology changes year-on-year to those making strategic automation, maintenance and change management decisions.”

Francis Norman, NERA’s General Manager Innovation and Strategy, sums it up: “AOG brings together the whole of the energy resources supply chain in one location every year where they can rekindle relationships, share insights and build opportunities for the future. Having an annual event that supports the supply chain in this way means that everyone can stay current with the latest ideas from Australia and around the world.” 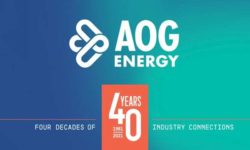